I own an old house built in 1911 and wanted a front door that looked like it came from that era. But I also wanted a door with windows at the top for aesthetics and to see who’s at the front door when someone knocks. Here’s what I bought. (Continued below) 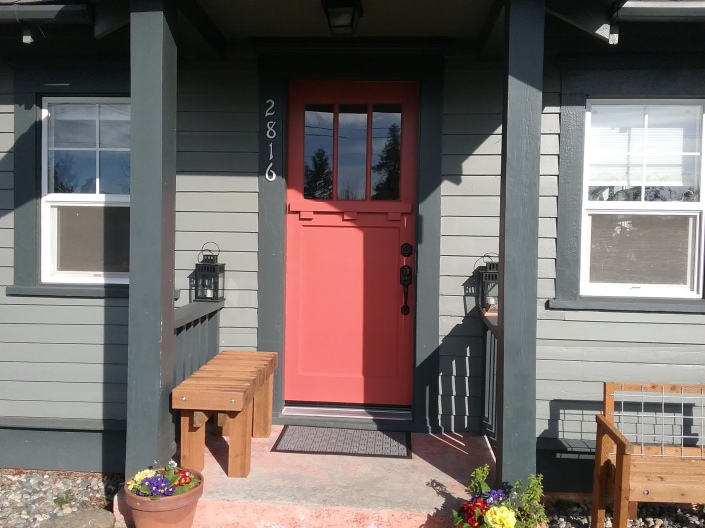 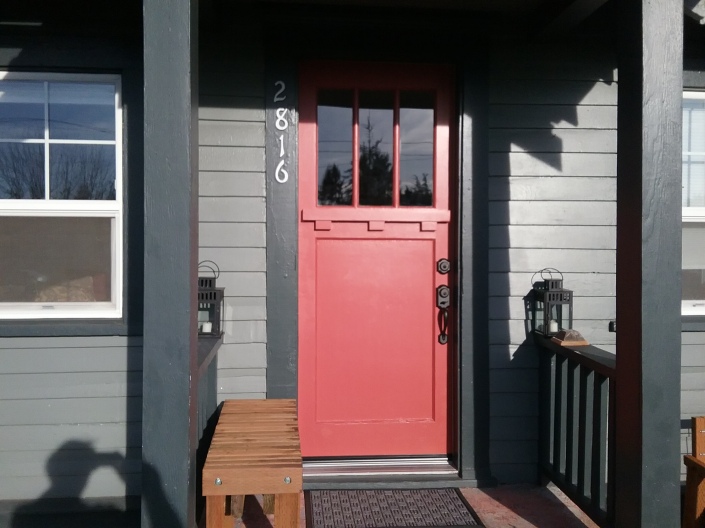 The top photos show two views of my new door after refurbishing and installation.

The photo just above shows my old front door leaning on the porch. It was a nice door, but didn’t go with the period of the house and didn’t have any windows. I painted it red but didn’t get the color quite right to go with the green shades on the house. I like the color of the new door better.

I have been pricing solid wood front doors with windows for over a year and found they cost $500 to $600 for a brand new door. The one shown here cost me $90 at the ReStore down the street. I had to look for a long time to find it but it was worth the wait.

The only problem was the door was the wrong length and width, had the door knob and hinges on the wrong side, and needed sanding and repainting.

Since the door had windows at the top that I was looking for and had the style and look I wanted, I decided to make a project of it.

The first thing I did was plug the holes that were used for the old antique latch since they were on the wrong side of the door. I turned a piece of wood to exactly the diameter I needed to press in and glue the plug. I didn’t have to fill in the hinge slots since I needed to cut an inch off each long edge. I filled in small depressions with wood putty and sanded smooth.

The paint on both sides of the door was cracked and checked so I stripped off the paint with paint remover and sanded both sides using a belt sander and lots of hand sanding. I then painted the door with good thick outdoor paint that included primer. I used a small roller designed for painting doors and touched up the inset edges with a brush. It took about 3 coats for coverage.

I then installed the latch (a venetian bronze colored handle set). I got the latch from Kwikset and was able to use the reprogramming feature on the lock to set it so my existing key would work. I screwed on and hinges and hung the door using the existing hinge and latch locations on the jamb.

This may seem like a lot of work (and it was) but the effort saved me about $500 on the cost of a door and gave me the old fashioned look I wanted.